In 1919-1920, marriages between US soldiers and young ladies from Finistere were not all something to be celebrated in Brest. But there had been some marriages at Le Relecq-Kerhuon. For example, William Francis ROGERS and Annette Ernestine KERJEAN married on November 29, 1919 (see marriage certficate). Annette was a first cousin of my grandmother’s half brother.

Annette lived in the hamlet of Keriezou, at Le Relecq-Kerhuon, just outside the American hospital No. 65, located at Feunteun Aon, on the edge of the Bay of Brest(*), to the west of the municipality (see maps). William was stationed at the hospital in 1919. Originally from Cambridge, Massachusetts, he worked as a corpsman in the medical corps of the US Army.

(*) The Sables Rouges (Red Sand) beach below is named for the color of the sand. Its color was caused by the oxidization of empty cans left for months there.

Annette was eighteen years old when she met William (see her birth certificate). He was ten years older than her. Annette was the fourth child of a family of seven. Her father, Yves KERJEAN, a pyrotechnist at the Moulin Blanc, died in 1917 at the age of 49. William’s parents, Manuel and Mary Julia ROGERS, were originally from Portugal but had immigrated to the US. Manuel ROGERS was a cabinetmaker by trade. Both of William’s parents were deceased by the time William married Annette.

Fearing he was too old for the 18 year old Annette, William lied to her about his age. At the time of their marriage, he said he was born on June 8, 1893, when actually he was born two years earlier as evidenced by his birth certificate. Annette would learn of his real age much later on when she was living in America.

Shortly after their marriage, William was transferred to another hospital in Koblenz, Germany. He spent six months in service there before being released from military service in June 1920.

Annette arrived in the United States on August 12, 1920 aboard the Pocahontas, as shown by the recording of her passage through Ellis Island in New York.

The couple moved to the Boston area. William became a meat cutter in a grocery store. Annette specialized in the sewing of furs for coats, stoles, etc. Their only daughter, Madeleine, was born in 1922.

When she arrived in the United States, Annette spoke very little English. She began to learn it slowly, aided by her doing crossword puzzles. She maintained her French accent throughout her life and was very proud of being French. Annette became friends with two other French women who had married American soldiers: Marie Louise LEEDEN and Marie WINTERS.

The couple ROGERS (William and Annette) and the couple LEEDEN (Adrianus and Mary Louise) were such good friends that they chose burial plots right next to each other so they could be neighbors forever. Marie Louise, née DESVAUX, was hailed from the Angers region. Adrianus, born in the Netherlands, obtained American citizenship around 1915.

Annette traveled back to France several times. She would certainly have wanted to go back more often, but the trip was expensive, so she had to save up each time for her airfare. Annette’s daughter, Madeleine, accompanied her twice: in 1926 and then in 1931. A part of one visit took place at the home of Annette’s older sister, Jeanne, wife of PICHON, at Compiegne. Annette also had a brother in Le Havre. Her other brother and three other sisters had remained in the Brest region.

Annette was very attached to her sisters (see opposite). When she came to Brittany, she visited Madeleine, widow of Désiré GRALL (who was killed by the Germans in 1944), who lived in Saint-Marc and Marie Françoise (Mimi), wife of Joseph QUILLIEN, who lived in Kerbloas Street in Lambezellec. It was there that, accompanying my grandmother in the early sixties, I met Annette. The three ladies shared their childhood memories at the Relecq-Kerhuon. 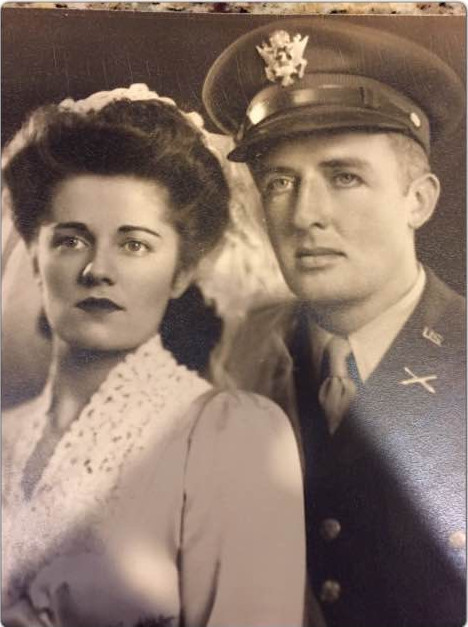 Madeleine, William and Annette’s daughter, graduated from high school in 1939. Her graduation gift was to have been a trip to France to visit her cousins. Unfortunately, due to the unstable political conditions in Europe at that time, her trip was cancelled.

Madeleine was married in 1943 to Charles Francis BRYSON. The wedding was scheduled to be held in Massachusetts, but because Charles (who had enlisted in the army and was on active duty) could not get leave to travel to Massachusetts, they married in Louisiana on an army base.

Charles enlisted as a private in the army but was quickly promoted to first lieutenant of a tank unit with four tanks under his command. His unit arrived in Europe and disembarked on Omaha Beach, three months after D Day (June 6, 1944). He and his men bravely fought during the Battle of the Bulge and saved the town of Hotton, Belgium from total destruction by the Germans. Once the war was over, Charles worked in the field of insurance for many, many years. After high school. Madeleine was a sales clerk, but for most of her life she was a homemaker. 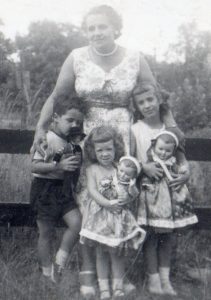 Annette KERJEAN with her oldest grand-children around 1957

When Annette came home from a visit to France, she always brought gifts. Nancy and Mary Elizabeth remember that once she brought them back beautiful Breton dolls in costume. (see opposite). She also brought back barrettes for their hair that were impossible to find in the United States.

In the fifties, Annette and William lived in Somerville, Massachusetts. After William retired, the couple bought their first home in Attleboro, Massachusetts. Annette was still working at that time and took the train to Boston to get to work. In her spare time, Annette, who was an excellent seamstress, made dresses for her two granddaughters. 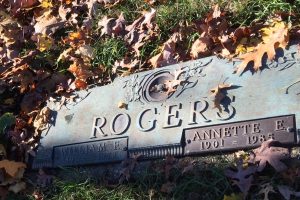 Tombstone of Annette and William
in Canton, Massachussets

After the death of William in 1972, Annette went back one last time to France, especially to Brittany, to see her sisters. She died in 1985 (see the tombstone of the couple, opposite). 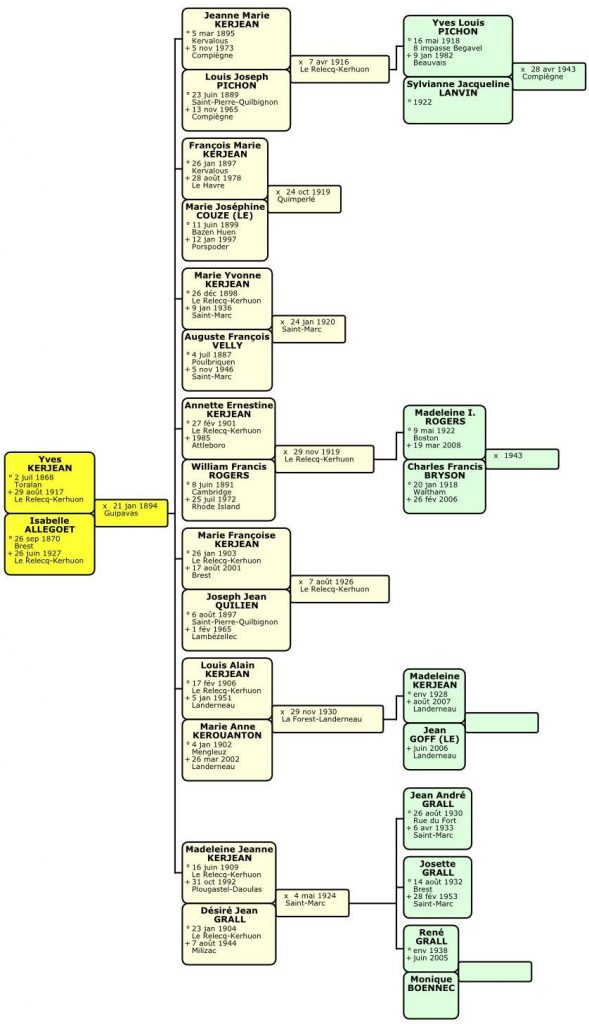